To kick of the Craft Beer Rising celebrations in style, San Sebastian brewers Mala Gissona have arrived in the UK early to run a series of exclusive beer tastings in around the UK.

The events begin on Friday 16th February at the Pen Factory in Liverpool before the Mala Gissona team head to Viva Cuba in Leeds on Saturday 17th,  Cask – the award-winning craft beer bar in Manchester on Monday 19th, Bar 44 and Asador 44 on Tuesday in Cardiff and then The Tapas Room in Tooting, London on Wednesday 21st. 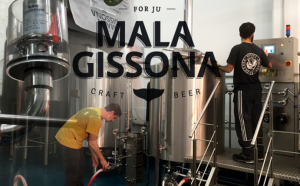 Both Mala Gissona founders Iban Zabala and Manu Murillo will be in attendance at the events to showcase a range of their latest beers including Batela, Green River, Azterritarra and the incredibly special Inguma – a pumpkin stout.

The Tapas Room event will be the last before Manu and Iban prepare for the Craft Beer Rising event running from Thursday 22nd to Saturday 25th February at the Old Truman Brewery, Brick Lane where they will be promoting their beers from stand 87. 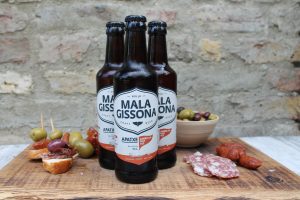 “It will be our second year at Craft Beer Rising so this year we wanted to make the most of our trip and visit some of our accounts in the most-hip and happening areas.  There is so much going on in the UK so we’re delighted to be able to takeover these venues and showcase the best of Basque beer.”

The beers being showcased by Mala Gissona during the week include:

Shackeltown IPA 6.5% – a tribute to the explorer Ernest Shackeltown, it’s a deep copper beer with a compact and persistant head brewed with Cascade, Mosaic, Centennial and Polaris hops. Aromas of peach and apricot with spicy hints of fresh balsamic. Intense and lasting bitterness with a full and balanced body.

Hőfn 5.1% – meaning “port” in Icelandic, it’s a dark porter with a tanned head and low carbonation. Medium body with a light bitterness that balances the mouthfeel, it has roasted and malty aromas with hints of chocolate. Brewed using Fuggle and Admiral hops.

Django. R 5% – a wheat beer brewed with ginger and named in honour of the great Jazz musician Django Reinhart, who influenced American Jazz during the 30s and 40s. A pale beer with a white head and intense and fruity bouquet, it’s very refreshing, lasting and light bodied.

Red Bay 5,2% – Named after a bay located south of the Newfoundland peninsula (Canada), Red Bay was frequented by Basque whalers from 1530 until the early XVIIth century. Our tribute to those seamen that crossed the Atlantic sea towards Red Bay’s freezing waters. Reddish coloured beer with a light beige head. Malty aromas, such as caramel and biscuit, with subtle floral notes. Initially sweet in the mouth, mainly caramel and toffee, turns into floral and spicy flavours that gives way to a dry finish.

Inguma: 6.4% – pumpkin Stout brewed with local pumpkins, nutmeg and black pepper in collaboration with our friends from Austmann Bryggeri.  Inguma is a maleficent genie from the Basque mythology.  Deep black in colour with a reddish hue. Intense sweet and roasted aromas. Silky and full bodied, combines malty, fruity and spicy flavours.

Last arrival to our core range.- refreshing hoppy Pale Ale of international inspiration. American, European and Australian hops provide tropical and fruity aromas with grassy and resinous notes. Light and silky body with moderated bitterness. Batela is the Basque word for dinghy, a small, open boat powered by rowing  that Basque Whale hunters used to use for moving people to or from a ship.