With Canada Day celebrations and the City Beerfest taking place earlier this month, we shook things up a little by bringing in a unique selection of Canadian craft beers to showcase alongside our famous Sleemans brand.

The new products from the Unibroue and Okanagan Spring breweries landed at the end of June and have seen stunning interest with all of the initial stock being grabbed and sold by the trade.  This included the Okanagan 1516 Lager, Okanagan Pale Ale, Unibroue Blanche de Chambly, Unibroue Maudite and Unibroue Fin du Monde. 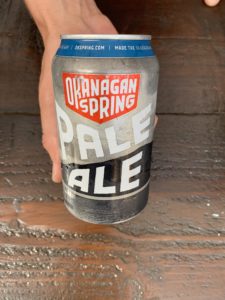 The arrival couldn’t have been timed better as the beers flew out into the trade and featured at the City Beerfest, which took place on the 18th July at the Guildhall in the City of London.

Due to the fantastic feedback, the beers will be back in the UK again soon so get in touch to register your interest and block book your stock now so you don’t miss out.  The beers include:

Okanagan Pale Ale 5% abv (12 x 355ml can) – In the OK, they like things with a bit of bite, and their Pale Ale’s no different. Not too bitter, just smooth enough, with a nice amber colour.

Based in Chambly, Quebec, Unibroue is a world-renowned craft brewery that has been delighting beer lovers since 1992.

Unibroue Maudite 8% abv (24 x 341ml bottle) – When La Maudite launched, its 8% alcohol content made it the first strong beer brewed in Canada. It’s warm and spicy character, which was unique at the time, called for a blasphemous name.

“Our world beers form a key part of our portfolio and continue to see strong demand as consumers search out authentic beers offering real provenance from all four corners of the world. Our latest launches from the Okanagan Spring and Unibroue breweries have highlighted the thirst in the UK for full flavoured beers so alongside our incredible Sleemans brand, we believe these brands will prove extremely popular.”