Cask Has Pulled And Gets Its Ancoat Second Site

With a solid reputation for providing the best selection of beers in Manchester, Castlefield’s renowned real ale, world and craft beer bar Cask has expanded its operations after opening its second site in Ancoats, one of the City’s most exciting new food and drink destinations.

Situated in Manchester’s former industrial heartland, the new Cask bar opened on Cottonfield Wharf on the Islington Marina on the 20th November ahead of the busy festive period. 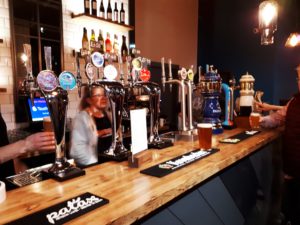 “We’ve been looking at potential sites for a long time but nothing really got us excited until this space came open. When it comes to going out, drinking and eating, it’s the place to be in Manchester with a fantastic vibe so it’s great to have the doors open ahead of Christmas and bring our little piece of Manchester to another iconic part of the city.”

In addition to an exotic array of beers from the UK and around the globe, we’re delighted to have our brands Krombacher Pils and La Pirata featuring in the beer list and our Laurent Miquel Père et Fils wines starring on the grape side of things.

“Richard has worked his socks off to make Cask into a fantastic bar and brilliant business that has a loyal following and an impressive reputation, not just in Manchester but around the UK. It’s a honour to have some of our exciting brands involved and we wish him and the team all the success.”

Ancoats Cutting Room Square has become an upcoming area in Manchester’s food and drink scene thanks to a venture between Manchester Life, the City Council and the owners of Manchester City, the Abu Dhabi United Group. The likes of Rudy’s Neapolitan Pizza, Seven Bro7hers, Elneco, Hip Hop Chip Shop and Sugo have all arrived and started to create a buzz in the district.