A big congratulations to the team at the Cape Brewing Co after the South African craft brewery picked up a Bronze award in the International Beer Challenge 2019.

Launched in February 2019, the CBC three-strong range including a Lager, a Pale Ale and an IPA have quickly built a strong following amongst the South African expats so this Bronze award for their Pale Ale is further proof of the innovative craft brewery’s big future. 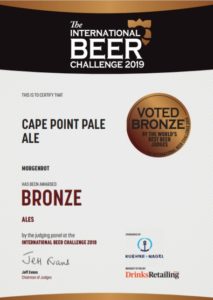 A leading and widely recongnised beer awards run by the team behind Drinks Retailing magazine, this year over 850 beers from 39 countries were entered and blindtasted by leading industry experts.