Following three incredible nights of darts at Nolan’s Freehouse in Vauxhall, Diogo Portela was crowned the champion of the inaugural Krombacher Darts Challenge after a tight and tense Grand Final.

The competition, which was aiming to drive interest in pub darts and raise awareness about the continuing closure of pubs and the loss of the vital dart boards, saw over 50 players compete over the three weeks. 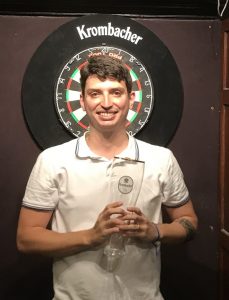 The Grand Final saw 16 players fight it out for the £400 first prize with Diogo Portela winning the final in a closely fought contest 6-5.

Diogo Portela is a Brazilian born darts player who plays in Professional Darts Corporation events, based in England.  Originally from Rio de Janeiro, Brazil, he is the first ever Brazilian dart player to play in the PDC circuit and represented Brazil last month in the Betway PDC World Cup Nations competition.

On the grand final night, a beginner’s competition was also run for the more casual players and those new to the game, which was won by Christine Hitchins.

“It’s our first foray into darts in the UK and it’s been an incredible experience.  I had no idea of the darts skill and talent on show in UK pubs so it’s been fantastic to support these grassroots of the sport and generate some real excitement. It’s just the beginning and we’re already planning for the next challenges when the darts season really heats up at the end of the year.”

“It’s been a real privilege to run the first Krombacher Darts Challenge and the three nights have been hugely successful and enjoyable for all.  It’s great to see a brand directly supporting the game and the pubs who are at the coalface of sport so we look forward to future collaborations.”

In the last 5 years, it is thought that London has lost a large proportion of its pub dartboards due to pub closures or them being taken down to accommodate food sales. The Krombacher Brewery recently became the official beer partner in Europe of the Professional Darts Championship with its Pils pouring at all PDC events in 2018 with the exception of the UK events. The brand is looking to further support grassroots darts in pubs and is planning additional competitions in November and December.