For those not able to make it down to Craft Beer Rising or for those just looking to make a week of it, we’re delighted to announce an exclusive tasting of our new Cape Brewing Co. beers at Hammer & Tongs on Wednesday 20th February.

Taking place from 5 – 7pm, the new trio of beers including the Cape Point Lager, Cape Point Pale Ale and Cape Point Indian Pale Ale will be on show for the very first time in the UK to try alongside some treats straight off the famous Hammer & Tong fire.

Attendees deciding to stay for a meal afterwards will also receive 25% of their bill. To confirm attendance, email s.tripp@morgenrot.co.uk 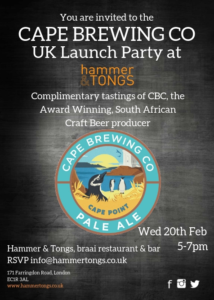 Inspired by their love of a traditional braai in South Africa, Hammer & Tongs offer juicy, tender & smoky cuts of meat cooked over wood.

Braai (rhymes with try) is South African barbecue. Hammer & Tongs only ever cook with Sekelbos (Sickle Bush) wood imported from Namibia. The smoke married with beef, pork, vegetables, fish – pretty much anything – creates a whole new level and depth of flavour.

South Africans have been braaing for thousands of years and over the centuries the flavours have evolved thanks to all the diverse culinary influences bought along with the many settlers. However, one thing has always stayed the same; the simplicity and skill of cooking over a wood fire.

The flavours experienced at Hammer & Tongs warm the soul. The beer bread, marinades and chutneys are all home made and inspired by the tastes of the Karoo and Stellenbosch. They source only the highest quality, local, seasonal ingredients and all of the meat is British free-range and fish comes from responsible, sustainable sources.