Our wine brand Planet Bee has raised an additional £3,672 in the last 12 months for the British Beekeepers Association’s Friends of the Honey Bee campaign, taking its total donation since May 2016 to £15,672.

The joint venture between ourselves and Mitchells & Butlers sees fifty pence from the sale of each bottle of Planet Bee being donated to the Friends of the Honey Bee national fundraising campaign. 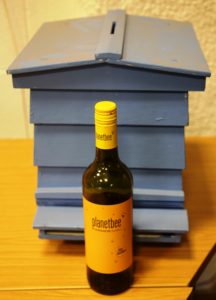 Planet Bee is a South African Chenin Blanc that is sold around the country in the Mitchells & Butlers’ Harvester and Browns venues.

The aim of the Friends of the Honey Bee BBKA initiative is to help stop the decline of bees worldwide.

It is also invested in nationwide projects aimed at increasing the number of pollen and nectar-rich pollinating flowers, plants and trees that bees need to thrive and prosper.

“We’re so proud of the work we have done to help the precious bees but a massive thanks has to go to all those M&B customers who have supported. We want to thank M&B and the BBKA for their help in getting this activity off the ground as it’s been a joy to be involved in. £15K in 3 years is a massive result but we hope it is only the beginning and that consumers continue to make the most of the Planet Bee wine to hopefully give British beers a big boost.”