The North’s longest running and biggest trade exhibition for the pub, bar and restaurant industries is back again this March with the Krombacher team once again on hand to showcase the leading selection of Germany’s best beers.

Taking place on Tuesday 19th and Wednesday 20th March at the Manchester Central Convention Centre, the show will feature a wide range of the latest products, techniques and concepts for the On-trade ahead of the key summer period. 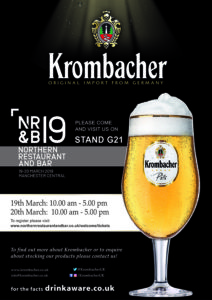 In addition to special Grape & Grain drink tastings, a Chef Live segment and a Market Kitchen Theatre featuring some of the North’s biggest culinary names, the event will also see Krombacher’s Matthew Stout running an exclusive tasting of the latest Krombacher beers.

Krombacher will be exhibiting from stand G21

The show address and opening hours are below: