With the continued closures in the pub sector having a devastating effect on pub darts, Krombacher is kicking off a campaign to help revive interest with the launch of its inaugural Krombacher Darts Challenge.

Taking place at Nolan’s Freehouse in Vauxhall over three Fridays in May and June (11th May, 18th May, 8th June), Krombacher is running a main competition for regular darts players and also a beginners competition to attract new blood to the increasingly popular sport. 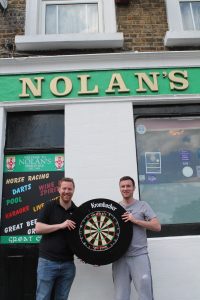 With a total prize pot of £940 along with a host of Krombacher dartboards, beer and goodies, the main competition will be run over two weeks in a league format with everyone playing each other.

The top sixteen players will then compete in the grand final on the 8th June when the beginners’ competition will also take place.  For further information or to book you place, contact Shaun at Nolan’s on 0207 622 3106 or email shaunnolan82@yahoo.co.uk

The Krombacher Brewery recently became the official beer partner in Europe of the Professional Darts Championship with its Pils pouring at all PDC events in 2018 with the exception of the UK events.

The brand is looking to further support grass roots darts in pubs and is planning additional competitions in November and December.

In the last 5 years, it is thought that London has lost a large proportion of its pub dartboards due to pub closures or them being taken down to accommodate food sales.

“Pub closures are killing darts in and around the capital and it’s a massive shame because interest in the sport seems to be increasing.  We probably have half the leagues that were running 10 years ago so something needs to be done as players are just losing their opportunities to play.  We already have people travelling from all around London and Essex to come here and throw a few arrows so I believe the demand is still there.”

To help stop this decline, Krombacher is offering special support packages to pubs with dartboards who would like to run competitions or to pubs that are interested in putting up dartboards for the first time. 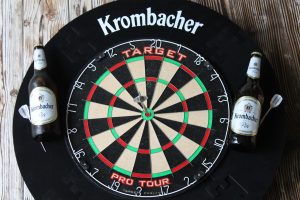 “Recent figures show the number of pubs closing every week is still in the double figures but what they don’t show is that many of these pubs were important for darts.  In the last 5 years, the biggest threat to pub darts has been pub closures so we’re hoping to raise awareness of this plight and hopefully help to reverse the trend.”

“Darts is the classic UK pub game and with interest in the sport at an all time high, we want to ensure that current players and newcomers to the sport have access to boards, games and leagues moving forward. While sponsorship of the PDC ensures the world’s best players will continue to have a platform to play on, we want to ensure that we also support the grassroots of darts, which is the pub.”