A hotelier whose life was rocked five years ago when he was hit with a double dose of bad news is back fighting fit and now looking to raise £2,000 for the British Heart Foundation with the help of Krombacher. 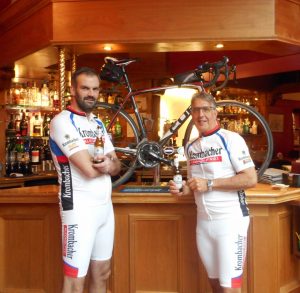 Chris Walker from the Selkirk Arms in Kirkcudbright was your typical hotelier until it was discovered that he had abnormal heart rhythms and following further routine tests, scans also revealed a brain aneurysm.

Two operations later and a change in his drinking habits, Chris is now 3 stone lighter, off all medication and embarking on the challenge of a lifetime as he attempts to ride from Kirkcudbright to John O’Groats for charity.

“It’s been a scary but overall incredibly positive last 5 years and I honestly feel 10 years younger.  I have never ridden more than 8 miles before so to take on 450 miles is a big ask but I’m looking forward to the challenge and raising funds for The British Heart Foundation who I owe so much.”

Now 54 years old, Chris will commence the challenge with two friends Ian Proud and Allistair Cooper in July with the support of German Brewery Krombacher, which produces the low alcohol beer which played a key role in helping him to severely cut down on his alcohol intake.

“With temptation all around, it’s often a real challenge for those who work in the on-trade to stop or cut down on the amount of alcohol they drink. I was lucky in one way as the quality of non-alcoholic beers has improved so much in the last few years.  We started to stock Krombacher Low Alcohol which for me is the best by a country mile and that honestly made a huge difference as I started my health kick.  The brewery is even supporting our ride and we’ll have cases chilled and ready in our support vehicle during the challenge.”

The challenge begins on Sunday 15th July 2018 with the trio travelling through Ayr, Tarbert, Portnacroish, Fort Augusta, Tain and Tongue before arriving in John O’Groats on Saturday 21st July.

To support Chris in his challenge, visit his Just Giving page – https://www.justgiving.com/fundraising/chris-walker57