After going down a storm with visitors to London’s Craft Beer Rising extravaganza in February, we’re delighted to have added a double, dry-hopped pineapple pale ale to our portfolio, perfectly named – How Do You Like Them Pineapples?

The new limited edition collaboration brew has been produced by the teams at the Ilkley Brewery and San Sebastian’s Mala Gissona brewery with only a small number of the kegs available. 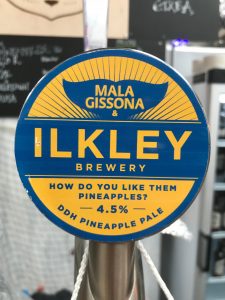 Available immediately in 30 litre kegs with a list price of £100, the incredibly unique and session-able beer is produced using real fresh pineapples in the brew.

How Do You Like Them Pineapples (4.5% abv) – a  fruity and juicy number with light, tropical notes and a pleasant resinous finish. Produced using Taiheke, Citra, Zythos and Denali hops.

“This exciting collab brew blew everyone away at CBR so we’re delighted to now roll it out to the trade ahead of the summer drinking season. Both Mala Gissona and Ilkley Brewery have fantastic reputations for producing creative and great-tasting beers so we don’t expect the limited number of kegs to last long.”

Basque brewer Mala Gissona is based in San Sebastian. Inspired by the local seafarers, they are particularly drawn to the Basque whalers who have ventured around Iceland since, at least, 1412. Links extended to the sailors and Icelanders developing a common ‘pidgin’ language. The same character found in the Basque whalers characterises the beer of Mala Gissona, craftily produced to reach a brilliance of flavour, hue, aroma and texture.

The Ilkley Brewery and Aerated Water Company was originally founded in 1873, and soon grew to become one of the region’s leading beverage producers and suppliers. The brewing tradition was brought back to the Yorkshire spa town after a 100 year hiatus in 2009, and like its predecessor, the new Brewery has built its reputation on the quality of the ingredients and skill of the brewing team.