With an increased demand for taste-rich, gluten-free beers,  we’re excited to announce the launch of the Batela Pale Ale from San Sebastian’s Mala Gissona craft brewery.

Joining our expanding world beer portfolio, which includes the most diverse selection of Spanish beers available in the UK, the new sessionable gluten-free brew is available immediately in 33cl bottles (cases of 12) to the ON and OFF Trade. 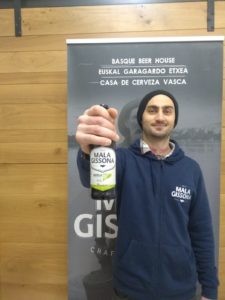 “Whether by necessity or lifestyle choice, there’s been an obvious rise in the number of consumers requesting gluten-free options so it’s vital operators have choices which are full of flavour as well as just ticking the box. Hailing from the food and drink mecca of San Sebastian, Batela offers a beautiful tropical hop-filled nose with fruity flavours continuing to the palate and a refreshing, long finish.  Whether you’re on a gluten free diet or not, the beer can’t fail to impress.”

Set up in 2015 by two childhood friends Manu Murillo and Iban Zabela, Basque craft brewer Mala Gissona is based in San Sebastian. After home-brewing together, the duo decided to take the plunge, pack in their jobs and give in to beer.  Frustrated that beer was under represented in San Sebastian’s pintxo food scene, the two set out to change that by producing adventurous, high quality beers that perfectly pair with fantastic food.  In a short space of time, the brewery has built a solid reputation and helped put beer on the Basque food map.  The brewery launched a craft beer bar in Donostia in December 2015 and its beers are now available around the world.