Following the successful launch of a limited-edition number of bottles at Craft Beer Rising earlier this year, we have added Barcelona Tropical IPA from Catalonia’s craft brewery Cerveses La Pirata permanently to our portfolio.

The special edition beer is brewed in collaboration with Quebec-based brewers Les Trois Mousquetairess and is available immediately in 33cl bottles in cases of 24. 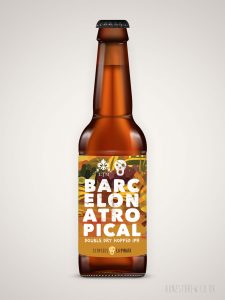 “We launched a limited number of this tasty creation earlier this year for Craft Beer Rising and the reaction from consumers was sensational so we knew we needed to make it a permanent line. The team at La Pirata consistently produce innovative, taste-rich tipples and this latest line is no different.”

The brewery was founded by a couple of home brew enthusiasts who after experimenting in their kitchen between 2004 and 2012 started to develop a strong following amongst their friends for their artisan brews. Soon realising that they needed to increase production on a larger scale, Cerveses La Pirata was born and the Pirates were finally able to come out of hiding.

After three years living a nomadic life brewing in other factories, La Pirata opened their first brewery in October 2015 in Súria, a small village 70km from Barcelona. Since its inception the brewery has won the National Award for the Best Brewery in Fira del Poblenou (Barcelona) twice, while also picking up a number of other awards including two bronzes at the Global Craft Beer Awards. Keen collaborators too, the Catalan brewery has also created crafty beers with the UK’s Brew By Numbers, Kaapse Brouwers of the Netherlands and USA’s Against The Grain. Cerveses La Pirata’s philosophy is simple – they brew incendiary, craft and natural beers which make people smile.

For more information or to stock Barcelona Tropical IPA,  call (0845) 070 4310 or email enquiries@morgenrot.co.uk