A huge congratulations to our marketing wizard and veteran fell runner David O’Neill who swapped the delightful Pennine hills for the flat pavements of London after being part of the successful Krombacher UK team to visit 303 pubs on foot in a day in London on the 16th November.

Starting at 8am at the Earl of Camden pub and finishing at 8.15pm at The Lord Moon of the Mall, just off Trafalgar Square, the tenacious team clocked up 29 miles and have raised just over £600 for the Licensed Trade charity to date. 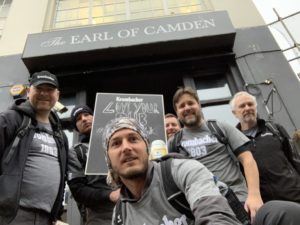 Insisting that all money raised be donated to the Licensed Trade charity, the Krombacher team declined the option of paying for an adjudicator, therefore forfeiting the chance of the official record.

The official Guinness world record for ‘most pubs visited in 24 hours by a team’ is 250 and is held by a team from the US – read more.

“It was a fantastic, albeit pretty gruelling day so a huge thanks to David for getting involved – he was legendary. We’re delighted to have hit the target of 300 and to have raised some money for an incredibly worthy cause. While it would be nice to be given the official record, the whole challenge was about generating money for the Licensed Trade Charity, so we just couldn’t justify paying out, what we thought was an inordinate amount of money for an adjudicator.” 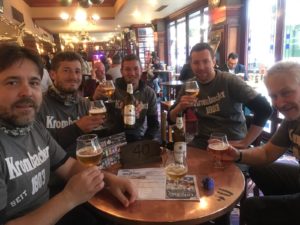 For more information on the challenge or to donate, visit www.everyclick.com/krombacherpubwalk2018

Krombacher has now raised in excess of £3,000 in the last three years for pub related charities with two team members previously running the Frankfurt Marathon and Stephan Kofler completing the SÜDTIROL SKYRACE – a 69km, 13,000 ft climb.

The Licensed Trade Charity provides valuable support to those who work, or have worked, in pubs, bars and breweries. This can take the form of financial support, along with a dedicated free helpline providing advice on health, mental health, housing issues, debt and relationships, and can also provide up to six counselling sessions for those in need. Other services include telephone befriending to combat loneliness in former trade workers, and retraining grants.

In 2017, 8,300 individuals benefitted from its charitable services, with £982,000 provided to those in need through social and educational grants for such items as rent, furniture and white goods. 385 people called the Licensed Trade Charity’s free telephone advice service in 2017, and over 60 information sheets are available on the charity’s website to give people support and advice on a range of issues.