Organisers from the City Beerfest, which Sleemans, Unibroue and Okanagan Spring exhibited at earlier this year, last week handed over a cheque for £13,406 to the Lord Mayor’s Appeal following the record-breaking craft beer event at Guildhall Yard, London, on 18th July.

The Lord Mayor’s Appeal does a fantastic job supporting three amazing charities: Place2Be, delivering a transformational mental health programme in 180 schools in London; On Side, providing five new state of the art Youth Zones in areas of high deprivation in London; and Samaritans, developing a revolutionary online wellbeing programme for employees in London and beyond. 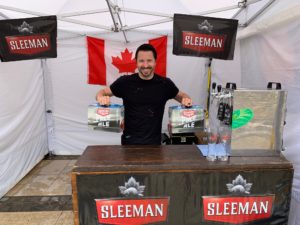 The cheque from the organisers of City Beerfest, which is run in conjunction with the Brewer’s Guild, was the largest ever donation it has given the Lord Mayor’s Appeal and shows how the event gets bigger and better next year.

Next year’s City Beerfest will take place on Thursday 2nd July and we’ll once again be there supporting our Canadian brands so keep your eyes peeled for further announcements!