A collaboration between Campbell and Villafranca-based Beercat Brewery in Catalonia, the #1 New Zingland IPA was the first of a series to be introduced to the UK at Cask earlier this year, with punters queuing to be one of the first to try the creative collaboration brew. 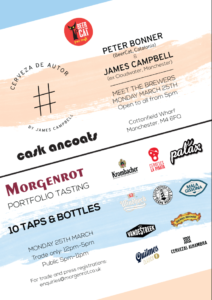 “We are very grateful to Peter Bonner and James Campbell for coming over to share the story behind the Cerveza de Autor project and give Mancunians the chance to be the first to try these incredible beers. The first reviews of the #1 New Zingland IPA were excellent so we’re excited to see the reaction to the second beer in the collaborative series.  We regularly import international collaborations and special batches along with our regular core lines, although James’ relationship with Manchester’s craft scene makes it extra special. The beers will be showcased exclusively at our trade tasting taking place during the day with the doors then being opened to the public ensuring everyone gets a chance to try them.”

Besides Campbell’s Cerveza de Autor range, a number of breweries and wineries from across Morgenrot’s portfolio will be available to try on the day. The beer range on show includes Spanish craft breweries Beercat, Mala Gissona and Palax; South-Africa’s first craft brewery Cape Point, a non-alcoholic IPA from Dutch brewers VandeStreek and Sierra Nevada’s California IPA. World brands such as Krombacher, Pelforth, Quilmes or Alhambra will complete the beer offer on show.

Cask Ancoat opened his doors last December in the Islington Marina. The sister site of the original Liverpool Street pub serves over 27 beers on tap from local to international breweries, every day from 12 to 11pm. Both sites are famous for their ‘bring your own food in, clean your own shit up’ rule. Twitter – @AncoatsCask

Beercat Brewery was set up by Martina Molloy and Peter Bonner in 2012, who, after pursuing their dream of setting up a microbrewery, swapped the streets of London for the vineyards of the Penedès and moved with their two young children to Spain. They are now located in a former bodega in Villafranca, right at the heart of Catalonia’s wine industry.