With the boom for low and no alcohol beers continuing in the UK, Germany’s leading premium beer brand Krombacher has launched its world renowned Pils in an Alkoholfrei 0,0% format.

A natural thirst-quencher, nutritious and an ideal alternative to full-strength beers and soft drinks, Krombacher Pils Alkoholfrei 0,0% is available now in 33cl bottles in cases of 24. 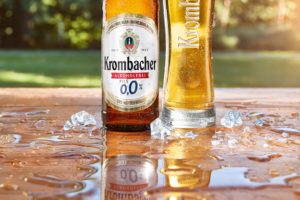 Krombacher Pils Alkoholfrei 0,0% is multi-occasional and as well as being isotonic, it carries less than 90 calories per 33cl serve.  Perfect for those giving up or cutting down, sportsmen and women, designated drivers or just as a healthier alternative to a sugar-laden soft drink.

As well as a targeted social media campaign and an advertising campaign, the launch is being supported with a wide range of tastings within the on-trade and participation in the Mindful Drinking Festival at Smithfield Market, London, on July 20th and at Imbibe Live, Olympia, London, over the 1st and 2nd of July.

The beers are produced using the same quality ingredients and in the same tradition of the brewery’s full strength beers with state-of-the-art technology and a special two-step process ensuring maximum flavour and nutrients are retained.

Krombacher Pils Alkoholfrei 0,0% – a natural thirst quencher with fine malt sweetness and zero alcohol. With the first taste it satisfies with its fresh hop aromas and its finish proves that this is a true Krombacher – clean, crisp and full-flavoured.

“We have been at the forefront of the low/no alcohol trend in the UK since 2013 with our low alcohol Pils and Weizen becoming firm favourites in the On-trade.  With consumers demanding more choice and quality when it comes to low/no drinks, we’re delighted to now add to our range with the addition of the Pils Alkoholfrei 0,0%.  For consumers looking for zero alcohol but a full flavoured Pils, it provides absolute clarity, real taste and I honestly don’t think there is a better option.”