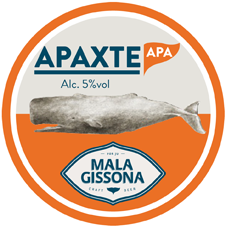 An American Pale Ale – Apatxe means the enemy!
APA is an American interpretation of the classic English pale ale style, characterised by fruity, flowery and/or citrus aromas, depending on the variety of American hops used.
This uses Cascade, Chinook and Columbus hops with Pale and Crystal malts plus flaked wheat.
Basque brewer Mala Gissona is based in San Sebastian. Inspired by the local seafarers, they are particularly drawn to the Basque whalers who have ventured around Iceland since, at least, 1412. Links extended to the sailors and Icelanders developing a common ‘pidgin’ language.
Alcohol/VOL:
5.0%
Tasting Notes:

An American Pale Ale characterised by an intense citric aromas. A golden amber colour and vibrant citrus nose of tangerines and orange peel; a full palate where initial malt sweetness is balanced with a slightly astringent bitterness giving a clean and fresh aftertaste.

Basque brewer Mala Gissona is based in San Sebastian. Inspired by the local seafarers, they are particually drawn to the Basque whalers who have ventured around Iceland since, at least, 1412.

These links extended to the Basque sailors and Icelanders developing a common ‘pidgin’ language.

“For ju Mala Gissona” is believed to be the commonly used expression in Iceland to refer to the Basque whalers. It translates as “You’re a bad man” but is an Icelandic slang term given to rough types, even rogues, at first impression, but who then prove to be honest, determined and loyal to their friends.

Mala Gissona beers are far from rough and definitely are honest, intrepid and adventurous – true to craft brewing principles.

Their beers are ‘bottle conditioned’, unfiltered and unpasteurised. The brewery has adapted the technique of secondary fermentation; after priming yeast has been added to a mixing vessel, the beer is then bottled or kegged and left to condition for 10 days at 20°C. The temperature is then reduced to less than 5°C to suspend any further yeast activity.

In keeping with the nautical influence, seaweed is used as a fining agent. And true to the fabulous cuisine of the region these beers are a fine match with seafood; with a range of Pale Ales and a Wheat Beer which is named after the great Belgium jazz guitarist Django Reinhart.