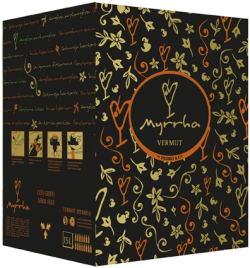 Myrrha, Spanish for myrrh, is a natural resin used for centuries as a perfume, incense and medicine but also used in vermouth-making. Myrrha Rojo offers a special contrast of delicate sweetness with a distinctive and slightly tangy taste.

The Padró family’s Vermut Myrrha is an exquisitely balanced Spanish-style vermouth, made following the traditional process from Macabeu and Xarel·lo grapes.  It is a cuvee of dry and sweet wines (mistelas) with Padro’s unique infusions of mountain herbs and oriental spices, followed by a careful blending, rested in barrels for at least six months before bottling.

Myrrh was highly prized by the ancients, so the name and label reflect the tradition and special character of vermouths as well as the importance of the natural herb infusions used.

Available as a 15lt Bag in Box and once opened it lasts for 2 months. Serve cold in a wide-rimmed glass with perhaps a twist of orange; alternatively it is an ideal a base for Sangria.

Alcohol/VOL:
15%
Tasting Notes:
Soft caramel in colour with shades of amber. Balsamic notes, aniseed and mountain herbs appear in the aromas. When shaken, aromas of spices emerge, such as vanilla and cloves, acquired during the resting period in wood. There is a caramel-like essence with candied fruits. In the mouth, its initially warm and enveloping character gives way to a blend of refreshing and elegant tanginess and a soft and velvety sweetness.
CONTACT US
< Back to